Discover what RSPO certification could do for you and your family – and the land and wildlife around your smallholding.

There have been many new accomplishments in Latin America this past year in terms of certification, membership, training and certification bodies. From 5 certified grower members to 13 in 2016, the RSPO also saw an increase from 270,000 tonnes of Certified Sustainable Palm Oil (CSPO) in January 2015 to 650,000 tonnes as of April 2016. This represents 19% of the total global output, meaning Latin America is reaching the same levels of certification as the rest of the world. These results can also be correlated to an increase of 18 certified mills in the region.

A series of trainings have been carried out in Colombia, Ecuador, Guatemala, Honduras, Costa Rica and Peru, while 3 new Certification Bodies (CBs) were accredited in the region–Naturacert, SCS Global Services and Icontec–which will soon become accredited CBs and contribute to the others working in the region.

Other exciting news relate to the legalization of the Latin America RSPO Office in Bogota, Colombia. This means there is an RSPO legal entity established in Colombia as of 2016.  This year will also bring the 6th Latin American RSPO Conference in Guatemala, starting the week of August 22nd. The Conference will be co-hosted by RSPO and Grepalma. The conference provides an opportunity to bring together different stakeholders from Latin America as well as direct participation from the RSPO Technical Secretariat.  The latest news on the implementation of RSPO in the region will be presented as well as the latest updates on NPP, P&C, PalmGHG and HCV. There will also be workshops for CBs, discussion panels and speakers. 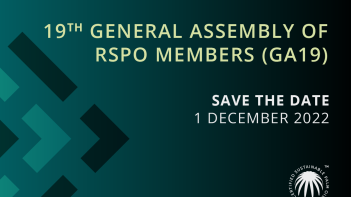 NOTICE FOR THE 19TH GENERAL ASSEMBLY